The most known and feared type of crime is street crime as it encompasses all types of criminal offenses, which happen in public places (Bellair, 2000). Street crime has a negative psychological and economic effect on communities (Silverman, 2004), hence this issue should be addressed both by the government and the community to achieve maximal result. Surveillance is an important dimension of community actions aimed at reducing and preventing street crime. Surveillance in the broad sense can be defined as the process of monitoring the activities, behaviors and other relevant information pertaining to the members of the community aimed at protecting, managing, influencing or directing community members.

There are different approaches to defining the concept of informal surveillance. Bellair formulated the basic definition of informal surveillance as referring to (2000): “casual, but vigilant, observation of activity occurring on the street and active safeguarding of property” (p.139). Informal social controls and person-environment interactions have a direct influence on the decisions that a member of the society makes; the decision to commit a crime is therefore strongly influenced by the absence or presence of the mechanisms of social control (Byrne & Taxman, 2006). Furthermore, informal surveillance can be viewed as the indicator, which shows the residents’ level of attention to social activity in the community (Bellair, 2000).

The concept of surveillance

From a theoretical perspective, the systemic crime model employs surveillance for effectively preventing and reducing street crime.  According to this model, there exists three levels of social control – public, parochial and private (Wright, Pratt, Lowenkamp & Latessa, 2013). The community should reinforce crime control and prevention methods at each of these levels in order to suppress crime and to establish effective approach to policing. At the level of public control the major role is played by the agencies and groups located outside of the area or neighborhood (Youstin, 2011). At the parochial control level, local institutions and community organizations such as churches, schools and volunteer organizations, play the major role. At this level, the structure and characteristics of the community determine the efficiency of crime prevention. The level of private control encompasses informal social groups, which exist in the community; at this level, crime control and prevention is performed with the help of withdrawal or allocation of social support (Wright, Pratt, Lowenkamp & Latessa, 2013). The dimensions of informal control include direct intervention, movement governing rules and informal control (surveillance). Informal surveillance performed at this level is expected to have a positive impact on the dynamics of street crime. The implications of the systemic crime model depict the relationships between informal control (surveillance) and street crime as illustrated by Fig. 1.

The role of risk perceptions and their impact on informal surveillance is supported and expanded by the findings of Silverman (2004), which indicate that street crime is related to the reputational concerns and social connectedness. Silverman (2004) finds that social determinants of street crime are driven by social fundamentals, so the connectedness of the society might contribute to the development of a street crime culture in the presence of an appropriate social environment. In the context of this reputational theory, informal surveillance is a valuable instrument because it can act as a counter-force and drive the reputational aspect of street crime development down.

The interaction of CPTED strategy and informal surveillance 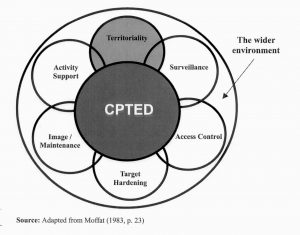 Research devoted to studying the impact of CPTED principles and variables on crime rates and victimization in the community shows that the neighborhoods where CPTED model was implemented have lower burglary victimization and higher income rates (Hedayati Marzbali, Abdullah, Razak & Maghsoodi Tilaki, 2012). It is determined that additional socioeconomic variables such as the average duration of house ownership and house type contribute to the rate of social control and surveillance in the neighborhood (Hedayati Marzbali, Abdullah, Razak & Maghsoodi Tilaki, 2012). Similar findings are reported by Cantillon (2006): it is determined that structural characteristics of a neighborhood have both direct and indirect influence on the rates of delinquency and on the rates of prosocial activity. In particular, the direct influence is the following: advantageous characteristics of neighborhoods significantly correlate with more intensive rates of prosocial activity, victimization and delinquency rates (Cantillon, 2006). The examples of indirect influence of community characteristics on prosocial activity are the improved level of community social organization, improved parenting practices, improved treatment of the delinquent peers, enhanced informal controls and informal surveillance

The findings of Cozens, Saville & Hillier (2005) indicate that although environmental design is effective for addressing street crime, the data on CPTED efficiency are ambiguous and there is evidence that interventions different from CPTED are less efficient than more conventional methods. However, Cozens, Saville & Hillier (2005) find that particular place-based interventions such as fencing, design changes aimed at enhancing visibility and staff surveillance lead to the reduction of robbery rates between 30% and 84% in different neighborhoods. Evidently, informal surveillance and CPTED are closely interrelated and these methods should be used an integral approach to better address street crime.

The specifics of informal surveillance in the context of urban nightlife, is explored by van Liempt & van Aalst (2012). These researchers note that nightlife revitalizes and improves the economical situation in communities. From this perspective there is a positive contribution of areas where nightlife is active to communities. On the other hand, there are negative social consequences in the areas with active urban nightlife such as noise, drinking, hanging out in groups, etc. Although the typical response to such factors is the increase of formal policing, van Liempt & van Aalst (2012) emphasize that it is efficient to tackle this issue from the perspective of the theory of “broken windows” and to focus on maintaining social order instead of preventing crime. In this context, informal surveillance has an advantage because it increases the level of security and trust similarly to formal surveillance, but does not have a negative impact on those who dive into the nightlife to experience risk and excitement.

Don't use plagiarized sources. Get Your Custom Essay

It should be noted that there are numerous factors of environmental design, which are directly interrelated with informal surveillance. These factors should be taken into account while adjusting community policies and stimulating informal surveillance. In particular, Welsh, Mudge & Farrington (2010) find that defensible space practices such as pruning trees to make the area more “watchable”, building of public footpaths in important places and removing objects obscuring lines of sight contribute to the increase of informal social control; there is also evidence that improved street lighting increases the quality of informal surveillance. Welsh, Mudge & Farrington (2010) have also found a psychological link between improved design of the environment, the related social dynamics (e.g. cleanliness, accuracy and good reputation of a particular place) and informal surveillance, driven by the increasing pride and cohesion among the residents of more advanced areas. This fact proves that implicit effects of informal surveillance linked to expanded understanding of this concept play an important role in addressing street crime and enhancing the environment.

Informal surveillance is a social strategy and it is likely that this strategy reaches its maximal efficiency while being reinforced by other social strategies. In particular, it is highly important to combine both individual and community approaches in determining the strategy of street crime reduction and prevention. Byrne & Taxman (2006) find that the approaches based on surveillance and on treatment should be combined, and instead of choosing one of these perspectives, society should combine these strategies and employ the best outcomes of both of these directions of thought. In the context of this research, the position of Byrne and Taxman can also be reinforced by the systemic crime theory, which illustrates the role of social controls on different levels. Therefore, a cost-efficient and probably the most socially efficient approach is to stimulate informal surveillance and the associated factors, to develop two other levels of social control – public and parochial, and to apply correctional treatment (with potential re-entry into the society) for existing criminals. At the same time, Byrne & Taxman (2006) state that community strategies are important to secure long-term social change. Hence, the suggested combination of strategic directions should be implemented with the emphasis on social control and informal surveillance, as the factors for shaping the social environment in the long-term perspective.

The direction of theoretical research which has promising perspectives in the context of reducing and preventing street crime is the study of the interaction between three components of the systemic crime model – private, parochial and public.  In particular, it is recommended to study the interaction of informal surveillance with parochial and public levels of social control, and the extent to which these variables influence each other. In this research, it was determined that informal surveillance influences the characteristics of the community (e.g. pride and connectedness). Therefore, there is an interaction between private and parochial control level in the systemic crime model. For future studies, it is recommended to identify the states of other social control variables, which maximize the effectiveness of informal surveillance and its impact on street crime.

It is recommended that this study include two steps. At step one, the level and quality of informal surveillance should be measured, as well as the level and statistics of street crime. After that, public policies and interventional aimed at reducing street crime should be implemented and the above-mentioned variables should be measured every year during 5 years after enacting the policies. An additional direction of research is the approach to enhancing informal surveillance in the community and methods, which can be used by public organizations to stimulate this type of surveillance. There is a lack of appropriate research in this area. The help of public organizations in enhancing private control in the community would be invaluable in the context of addressing street crime.

From a community perspective, it is recommended to develop the propensity towards informal surveillance in the community. For this, it is recommended to educate community residents about the importance of informal surveillance and its role in maintaining neighborhood safety, helping the residents “identify and establish community norms that support prosocial behavior and mutual trust” (Warner, Beck & Ohmer, 2010, p.366), facilitating the ability of residents to intervene in a supportive and respectful manner, and creating social capital with the help of different strategies of community organizing (e.g. CTPED). CTPED and informal surveillance strategies should be aligned and combined to maintain neighborhood safety, reduce and prevent street crime.

https://freeessays.club/street-crime-and-informal-surveillance-essay/
[Accessed: June 30, 2022]
Having trouble finding the perfect essay? We’ve got you covered. HIRE A WRITER

Haven't found the right essay?
Get an expert to write you the one you need!
Get your paper now

Sources and citation are provided